It would be remiss of me to not dedicate my first “special footballer” post to Mesut Ozil, my most favorite of all players out there in the world of football. I’m just a little hesitant to start such an endeavor, knowing I may not be able to stop writing, or uploading images. My library of pics and gifs has grown so large, it’s going to be difficult to choose just a few. However, I’m sure I’ll have good reason to post about him often, so I’ll just spread them out. But first, let’s start with what I believe he deserves to be known for above all else… his incredible skills and talent as a footballer.

It pains me to write these words but… I did not really notice or watch him during the World Cup 2010. I know, I know… he was FABULOUS in the World Cup (I’ve gone back and watched as many of the highlights as I could get my hands on on You Tube since then)… But because my hubby was gung-ho over Spain, that was who we watched and followed. Which probably means the only game I watched of Germany was the Spain/Germany semi-final. What I do remember… again, pains me to write this, is my husband pointing him out and saying, “That guy looks like Stewie”, as in from the cartoon The Family Guy. 😦 I think I agreed, and that’s all I can remember from that time. 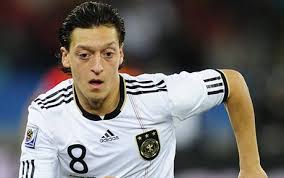 Fast forward a few months to when I started watching La Liga games… Barcelona and Real Madrid games in particular. We get GolTv here in the States, which means we have the pleasure (depends who you ask I guess, but I LOVE him…) of listening to Ray Hudson commentate either the Barca or RM match each weekend. Well, thanks to Ray constantly gushing over “this special little footballer” named Mesut Ozil, I started to pay attention to what it was Ray was talking about.

OH. MY. GOD. That boy could play. He could dribble. He could launch long balls. He could speed past the fastest of defenders. He could “truck it” full field without slowing down. He could shoot. He could juggle. He could soft-touch the ball out of the air. And my personal favorite… He could deliver that deadly, heart-stopping pass that led to a beautiful goal. Other than not being much of a “header” or a particularly fearless wall participant, he could do it ALL brilliantly.

Setting up for another terrifying wall experience…

And so effortlessly, and elegantly, and efficiently. His skills sold me. I was knock-down, drag-out, SOLD on this little Stewie look-alike. After about two matches of this “paying attention” I went from a casual football fan to an obsessive one… determined to pay better attention to all things related to this sport. Because it was all beautiful.

Speaking of beautiful… I may have also become, ahem, a little obsessed by his unique look as well. Admittedly, he’s not what I would call “obviously” handsome by the casual onlooker. I get that. He takes a little studying to truly get it. 😉 There’s some unique combination of attitude, personality, hard-work, talent, physique, AND physical beauty that all come together to form what is “Mesut”. I’m often teased by my family and friends that don’t get it with him. But what they don’t understand is that his beauty really does extend beyond the most shallow definition of “attractiveness”. And there are MILLIONS of others that do get it, so I take comfort in knowing that I’m not alone.

Ok, I think I’ll stop there. I could go on and on and on… but knowing he will give me good reason to talk about him again in the near future, I’ll save my additional words and thoughts for another time. 🙂